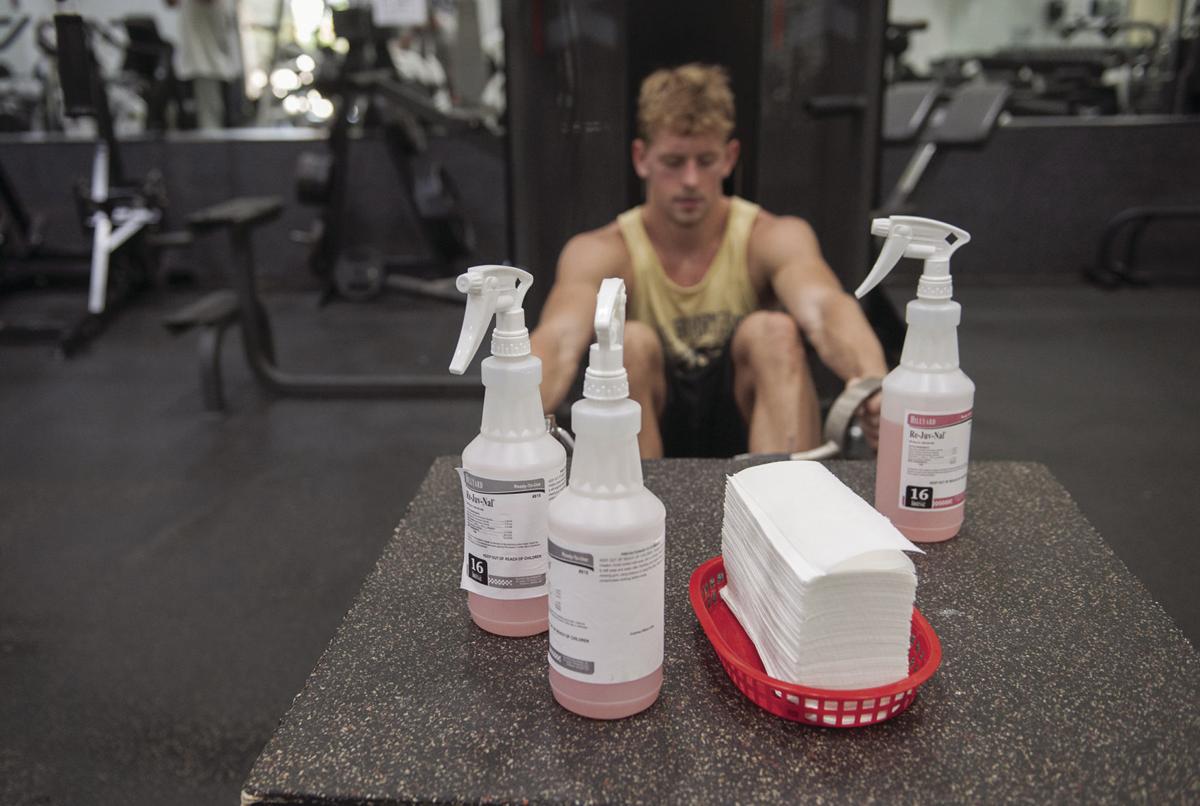 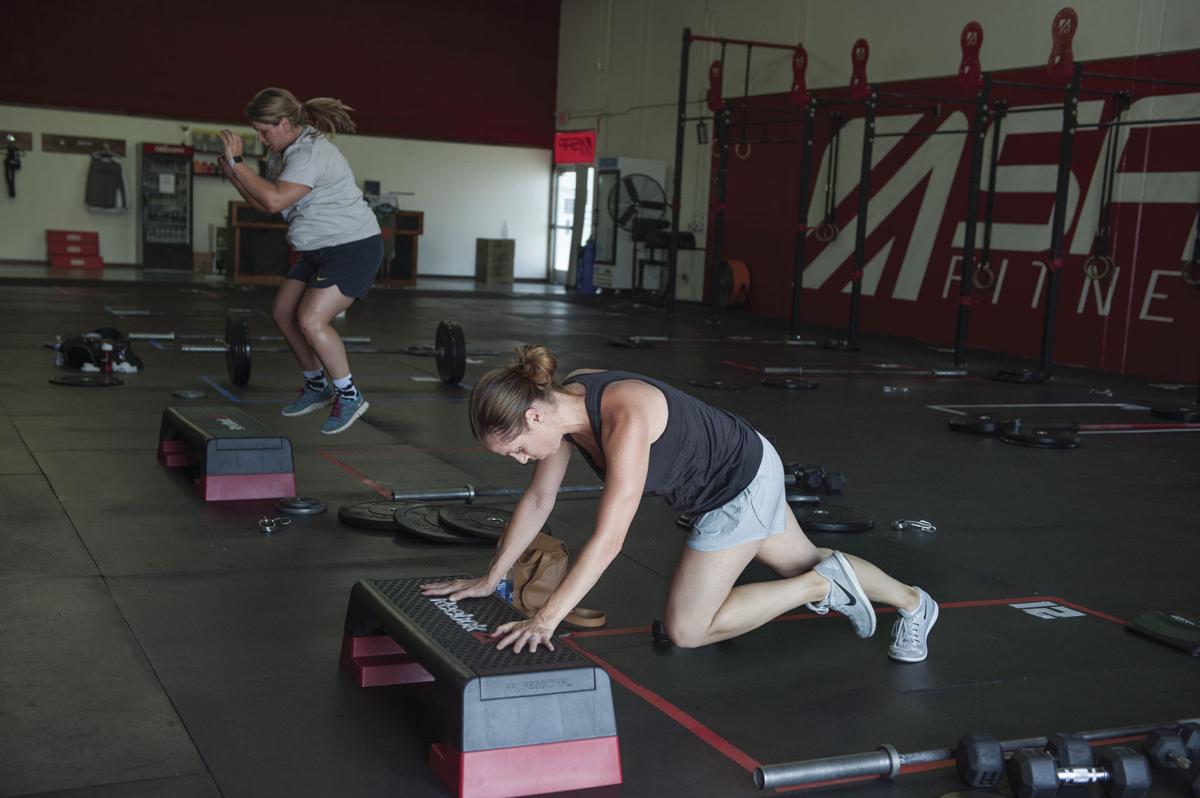 BEA AHBECK/NEWS-SENTINEL Mary Keigley, of Lodi, front, right, and Betsy Colburn, of Clements, left, work out within their boxes at ASAP Fitness in Lodi Tuesday, June 23, 2020. 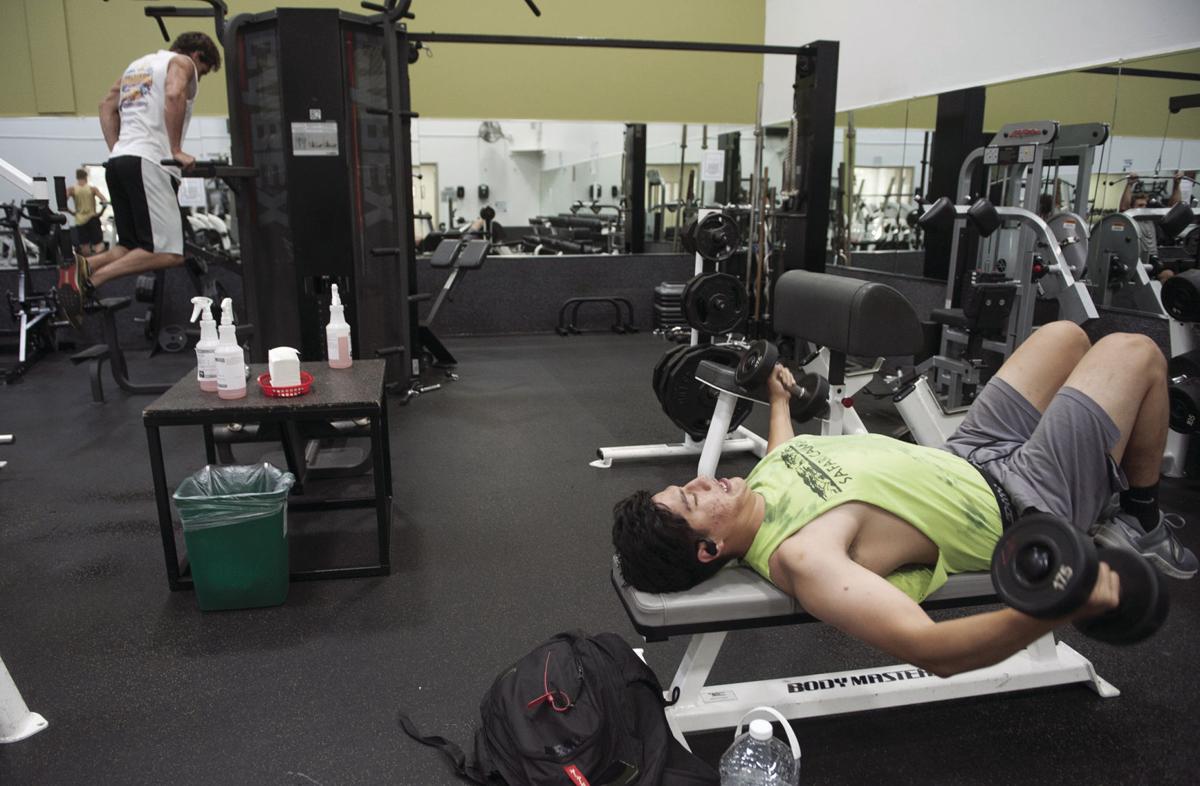 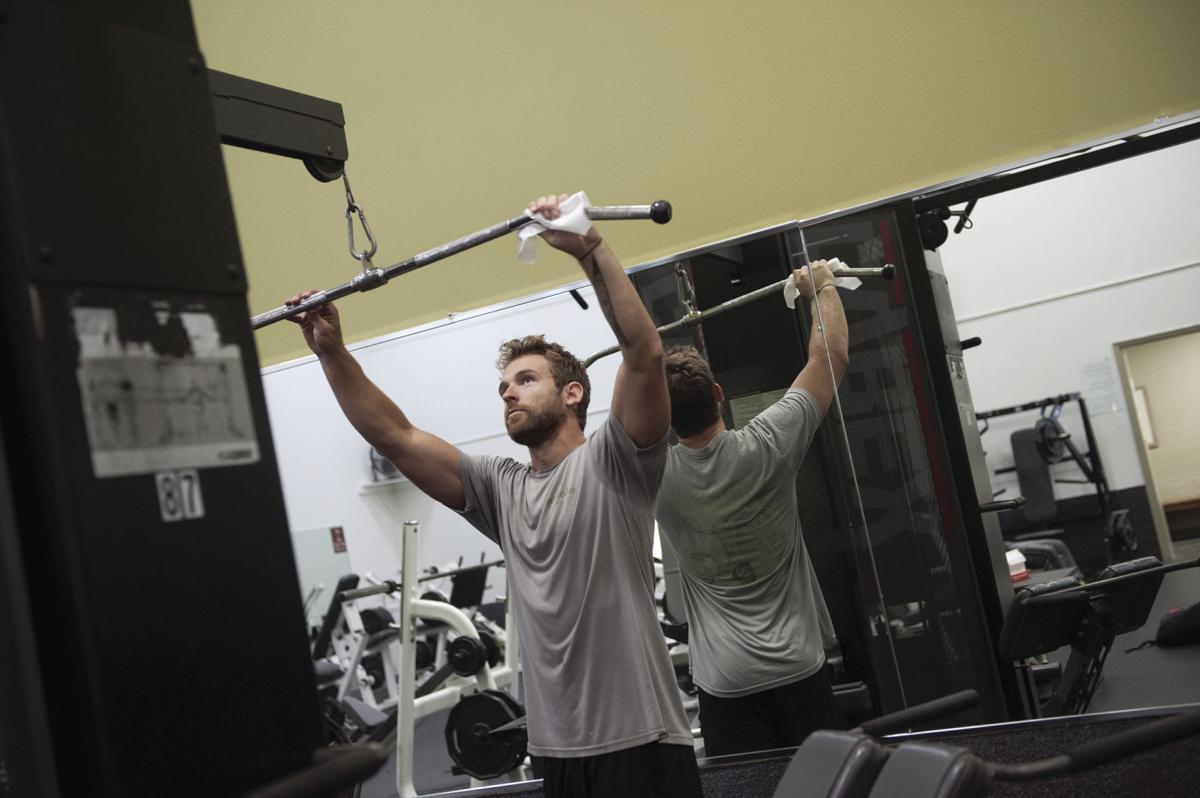 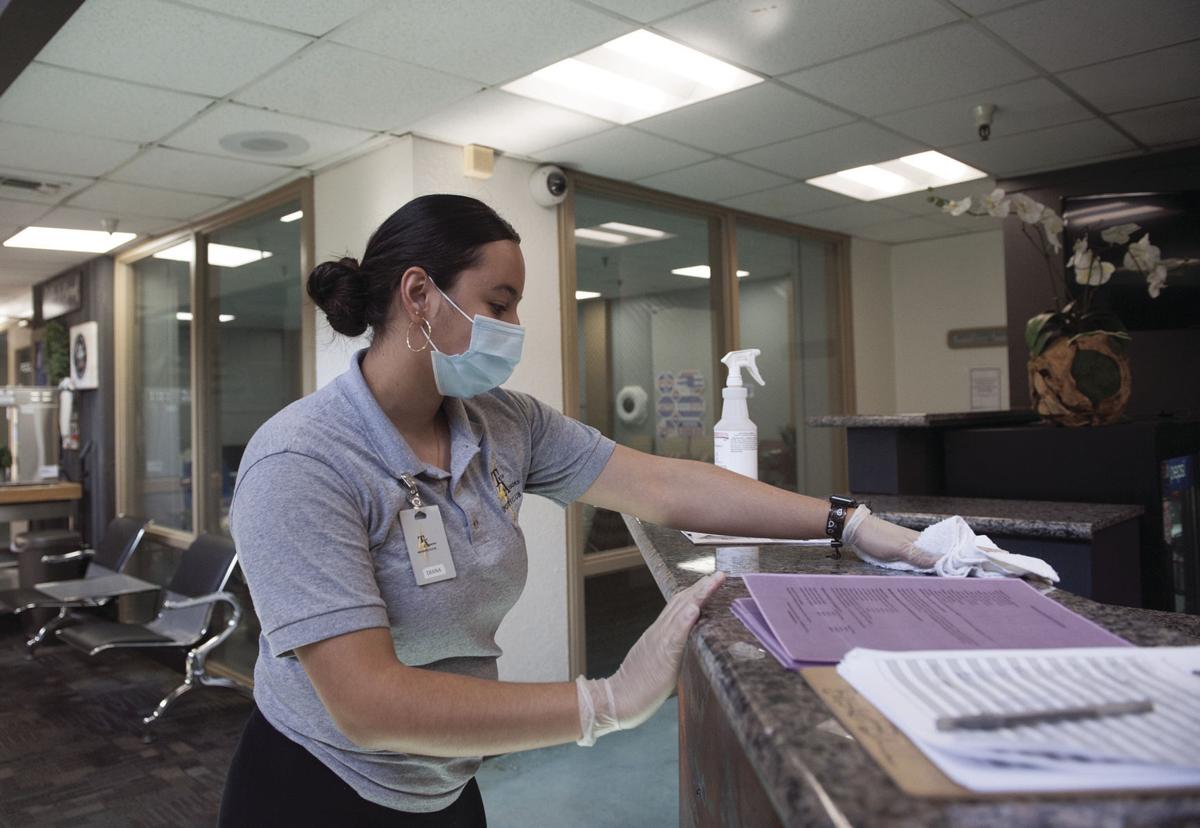 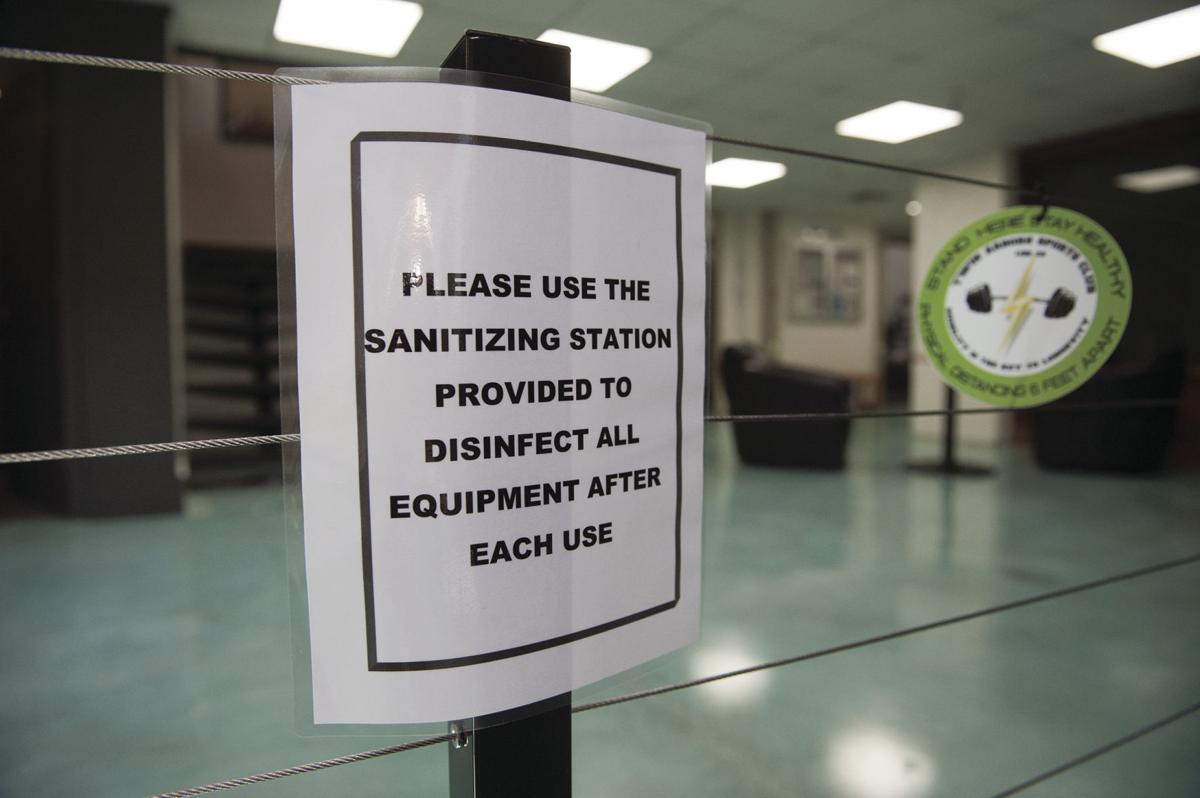 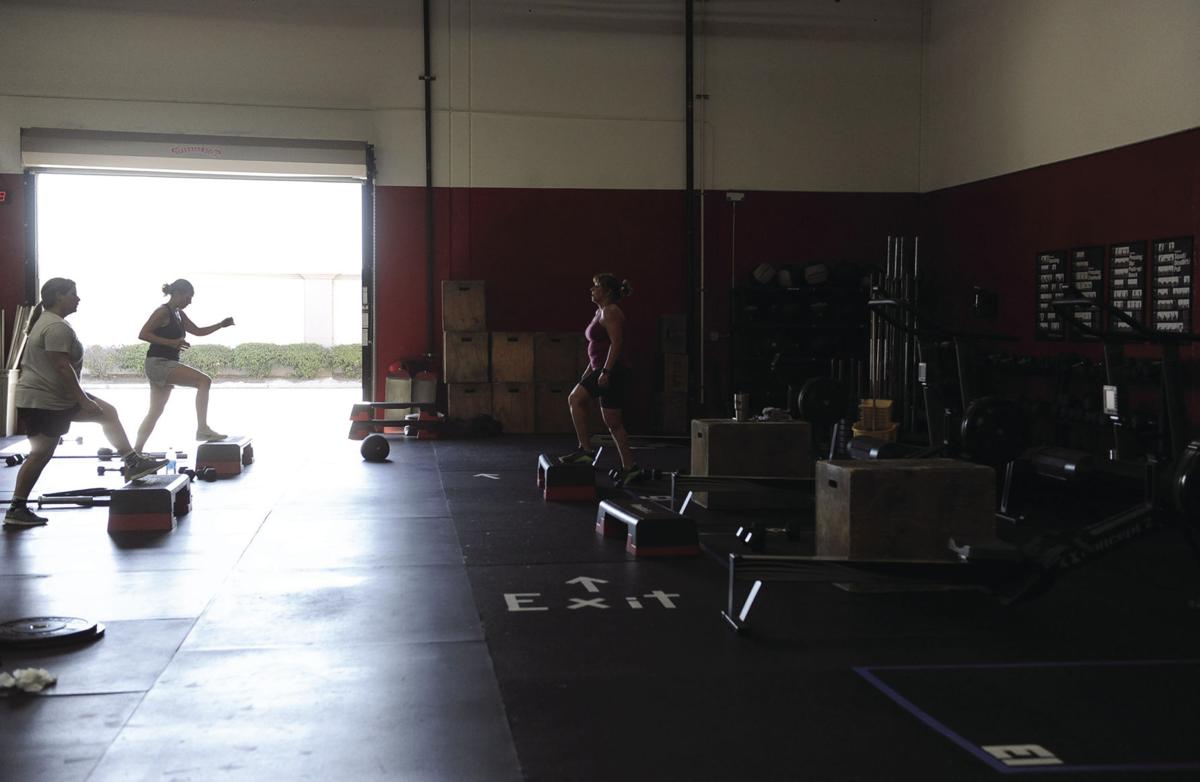 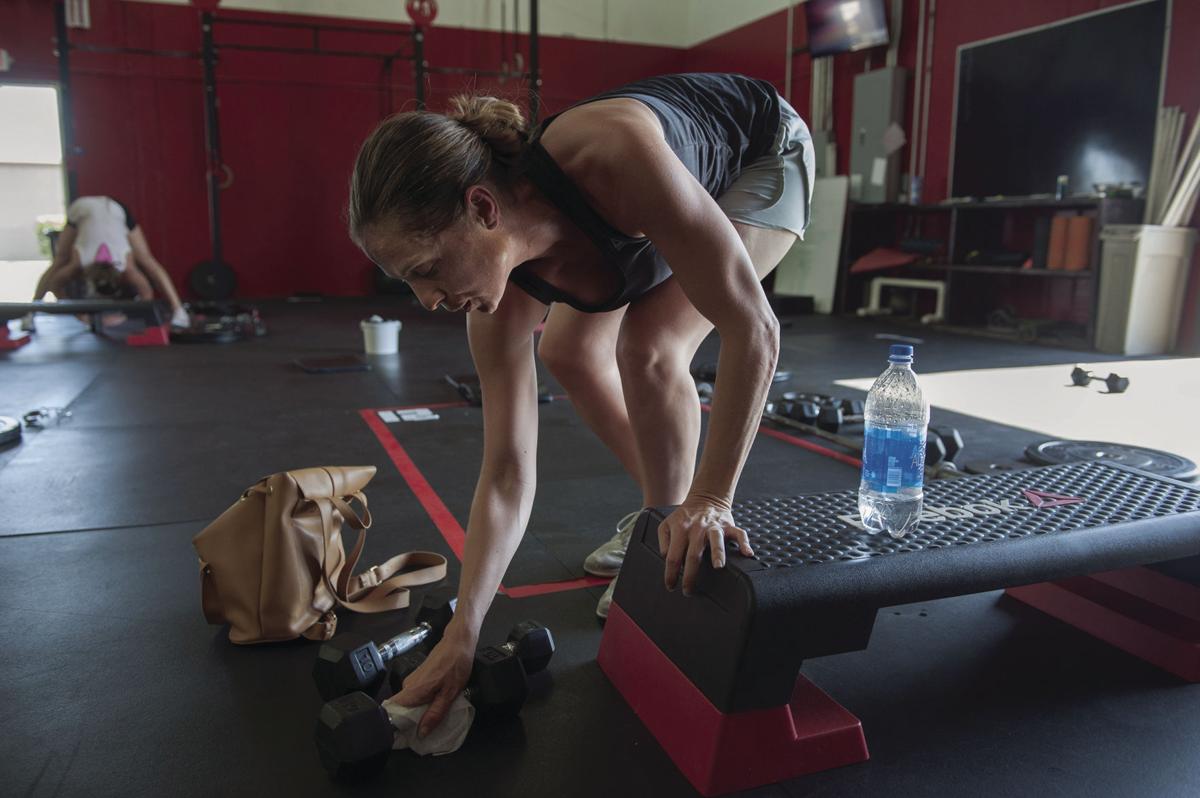 BEA AHBECK/NEWS-SENTINEL Mary Keigley, of Lodi, disinfects her weights after working out at ASAP Fitness in Lodi Tuesday, June 23, 2020. 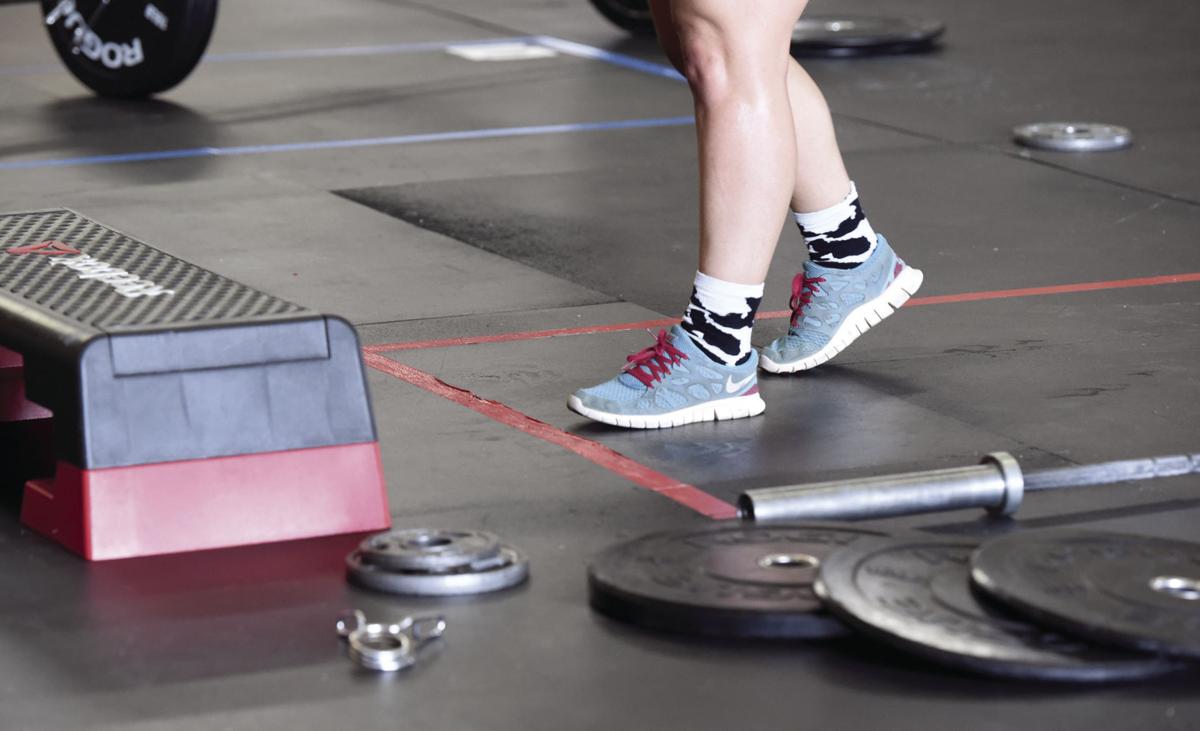 BEA AHBECK/NEWS-SENTINEL A woman works out within her box at ASAP Fitness in Lodi Tuesday, June 23, 2020.

BEA AHBECK/NEWS-SENTINEL Mary Keigley, of Lodi, front, right, and Betsy Colburn, of Clements, left, work out within their boxes at ASAP Fitness in Lodi Tuesday, June 23, 2020.

BEA AHBECK/NEWS-SENTINEL Mary Keigley, of Lodi, disinfects her weights after working out at ASAP Fitness in Lodi Tuesday, June 23, 2020.

BEA AHBECK/NEWS-SENTINEL A woman works out within her box at ASAP Fitness in Lodi Tuesday, June 23, 2020.

Five women and one man were working out at ASAP Fitness in Lodi on Tuesday afternoon, all inside their own red or blue square on the floor, with ample spacing in between. Each class participant worked out at their own pace within his or her square in an alternating cycle of movements.

The privately owned gym, which focuses on functional fitness, has small classes led by a personal trainer, manager Jet Cara explained. The gym was finally able to open up after restrictions on gyms were lifted by San Joaquin County health officials last Friday. They have incorporated a number of practices to adhere to state and local guidelines during the pandemic.

The new safety guidelines start when the members first pull up to the gym. They are asked to stay in their cars until class is ready to start. Upon entry, each member sanitizes his or her hands. They also clean their equipment before and after each session, while maintaining social distancing for the entirety of the class, explained owner Anthony Malta. Members also have a designated entrance and exit to ensure they are not crossing paths, as well as paths to the restroom.

“We also do a sign-in system, because our classes are capped at a certain number, to make sure the gym is not overcrowded. They have to reserve their classes 24 hours in advance to make sure we have a spot for them,” Malta said.

Malta said ASAP’s members were really excited to get back into the gym. But as an alternative, if someone is still not comfortable coming into the gym, they have also been lending out equipment and hosting virtual workouts.

At Twin Arbors Private Sports Club on Hutchins Street, new protocols have been added to protect members and employees. Sanitizing stations are located throughout the gym and physical distancing signs are placed throughout, as well as signs limiting the amount of people in certain areas of the club.

In the weight room, for example, no more than six people can work out at a time, and members are asked to practice social distancing. Members are required to clean all equipment right after use. Multiple bottles of sanitizers and wipes are placed on tables in the room.

In the cardio room, equipment has been spaced out to follow the social distance guidelines.

“We are asking all members to wear masks in common areas and where they cannot do physical distancing,” co-owner David Claxton explained. “But we have 28,000 square feet of space, so it’s pretty easy for people to spread out.”

In addition to a complete nightly cleaning, staff continually cleans equipment, door knobs and counters during hours of operation.

The club’s sauna and Jacuzzi will remain closed, per CDC guidelines, but the pool is open.

Claxton said the response to the reopening has been very positive.

“Our members are happy and sore. They have been cooped up, and unable to do a lot of exercise for three months. Everybody is really, really happy,” he said.

“It’s a blessing!” member Muhammad Ahmad of Lodi said of the reopening. He was one of six members using the weight room Tuesday afternoon.

Chris Hernandez was also working out in the weight room.

“I got tired of working out in the garage,” he said. “I was limited on what I could do there.”

Claxton said that gyms are very important to people’s physical and mental health.

“I have had the belief from day one that gyms are essential businesses. People need the physical exercise, not only for their bodies, but also for their minds, and a lot of people have been under a lot of mental stress during the last three months. Had they had the opportunity to continue their healthy lifestyle during all of this, they probably would have been more mentally and physically healthy,” he said.

“I know people have been going crazy staying home all day, and now they can get rid of some of that energy that’s been pent up,” he said.

Mary Keigley of Lodi was one of the class participants at ASAP Fitness. She said being able to come back to the gym was a relief. Having given birth in December, she had only been back to the gym for a week or two before the gyms shut down in March.

“Even more than physical benefits I receive here, it was a mental health thing. That is so important, even coming only one or two days a week. That one day, just to get out of the house, is everything that I need and I am just so happy,” she said.